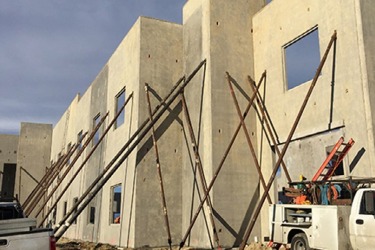 With the green revolution fully underway, the question of concrete as a sustainable construction substance has to arise sooner or later. Should architects and engineers now consider alternatives in order to comply with the global demand for low-impact building materials? Science, historical data and common sense all say no. Just the opposite is true. Concrete’s inherent nature passively promotes substantial energy conservation. Add in the developing innovations, and it actively contributes to the removal of environmental pollutants, making it sustainable—and quite desirable—for environmentally-friendly construction.

The primary component of the cement that binds the aggregate to form concrete is limestone, one of the most common and abundant minerals on earth. Because limestone, calcium carbonate, is formed from the remains of marine life, new deposits continue to form in the oceans. However, since surface deposits cover vast areas above sea level, ocean mining may never come into play for manufacturing concrete. Like limestone, the other constituents of cement and concrete are found in massive quantities around the world.

Building with concrete can rightfully be touted as 3-D printing writ large. Unlike materials that come in bulk and must be cut to size (with much waste), building with pourable and moldable concrete requires only enough to fill the forms according to the pre-established design. Leftover product, if any, usually goes back to the plant and becomes large, semi-regular blocks. Said blocks can be used to shore up eroding hillsides, among other purposes. Very little concrete ever goes to waste.

RECYCLED ADDITIONS AND ITSELF RECYCLABLE

Not only can old concrete be reduced and recycled into new as the aggregate component, it can be broken up and used in place of whole rocks. As rip rap, blocks of old concrete serve along waterways to prevent erosion and along shorelines to quell waves. Often, it is reused as new road base. For some design purposes, industrial slag and fly ash from power plants are desirable additions and so help recycle those elements that would otherwise be handled as waste. Moreover, biowaste technology will enable more plants to burn trash to fire the cement kilns, keeping it from feeding the landfills.

Tour any old European city and the ancient ruins therein, and anyone can see that concrete endures as a building material. Unlike wood, that rots and burns, and metal that rusts, concrete structures save on future replacements and never add toxic particles to the air from combustion.

As a thermal massor, meaning it absorbs heat, heavy-framed buildings (concrete walls and roofs) hold the interior the heat in winter and absorb the exterior heat in the summer. This barrier between outside extremes and interior comfort reduces operational HVAC energy usage by an estimated 29 percent, maybe more under ideal conditions. Furthermore, impervious concrete stops thermal transfer, unlike most other building materials. As an added bonus, it does not off-gas, as do petroleum products and chemically-treated woods, helping prevent “sick building” conditions.

As a light-colored surface, uncoated concrete reflects sunlight back to space and thereby exempts itself from the urban heat island effect.

One very exciting concrete product from Italy is photocatalytic concrete. This special, patented concrete can eliminate smog by up to 80 percent depending on atmospheric conditions. Smog, consisting of nitrogen and sulfur oxides combined with volatile organic compounds or hydrocarbons, is attracted to the photocatalytic concrete. Once attached, it becomes oxidized and neutralized by the UV radiation of the sun. Rain and snowmelt then washes the resulting harmless salts away, leaving a clean, white surface. This concrete proves great for roads, roofs and exterior walls, especially in highly polluted cities. It toils away each day to actively scrub the air. The developers estimate that if only 15% of urban roadways and buildings were constructed with photocatalytic concrete, up to 50% of the ambient pollution would cease to exist. Their product even eliminates some bacteria, fungi and odors.

Pervious, porous, concrete, which is actually a fairly old technology, allows water to percolate through it rather than run off to water channels. Not only does pervious concrete allow for the precipitation over cities covered in roofs and paved roadways to soak back into the ground and refill the aquifers, such retention-in-place of the water curbs damages from stormwater runoff. Pervious concrete is plenty strong enough to be used for parking lots and curbside lanes to capture the runoff from the existing pavement.

Some may be concerned that the production of concrete adds too much carbon and carbon dioxide to the atmosphere for it to be considered sustainable. From mining, milling, cooking the cement and transportation, one can’t argue that concrete has some impact on the environment. However, no industrial building material, be it lumber, metal, natural stone or a sturdy petroleum-based product, can come into existence without similar carbon costs. Of all extant construction materials, though, the ecological benefits of building with concrete places it very high on the totem pole for ultimate sustainability.