CONCRETE VOID FORMS: ONE WAY TO DEAL WITH COLORADO'S 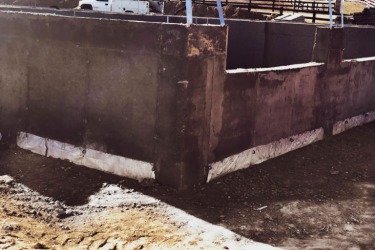 When pondering natural hazards in Colorado, we might think of lightning strikes, violent hailstorms, wind, blizzards, flash floods, meteorites and maybe even Bigfoot. But the number one natural hazard, according to the Colorado Geological Survey, actually comes from the ground. It takes the dreaded form of swelling soils and heaving bedrock.

Although expanding soils won’t suddenly swallow you up, they can certainly do a heap of damage to everything built above them. Just about everywhere you might want to plant a structure in Colorado, you’ll find a potential for swelling soils. Depending on the mineral constituents in the soil, its volume can expand upwards of 20 percent and exert a force of 30,000 pounds per square foot. Under such an attack, foundation slabs, piers and stem walls can easily crack apart. Few elements of a home are as expensive to repair as the very support structure upon which the rest of the house rests.

How do you deal with this hazard when planning a to build a home in Colorado?

Fortunately, you have several options, or combinations thereof. Engineering Design & Testing Corp. recommends the following solutions when planning construction over swelling soils. First, though, you must get a soil engineer’s report detailing the nature of the soil at various depths. Depending on the results, you can mitigate according to code requirements and the size of your budget.

First, a word about bedrock heave: It happens when water-saturated soils push horizontal bedrock into a vertical position. Most often, it happens closer to the Colorado Front Range foothills. You can see dramatic examples of bedrock heave in Roxborough State Park in Douglas County and the Garden of the Gods in Colorado Springs. Although those giant walls of bedrock were pushed up from seismic activity, expanding soils can cause the same phenomena with enough force to cause significant damage to buildings. In these desirable yet dangerous locations, excavating to bedrock and placing piers may not help much. If the bedrock itself is forced upwards, the piers will move with it, cracking the foundation and superstructure. But further east, where the bedrock remains stable — or the deeper soil is well-compacted and non-expansive — pier footings are a good partial solution.

If the offending soils are fairly shallow, you may find that simply dredging them out and replacing with a compacted, non-permeable soil is a good, inexpensive remedy. However, keep in mind that the surrounding neighborhood soils may still impact your home site. After a period of heavy rains, the adjacent ground may exert enough lateral pressure to impinge on the soil under your home or outlying buildings. A survey of the surrounding properties should help you decide if replacing your soil will work.

To maintain a constant moisture level sub-grade, you can deploy bentonite mats. Bentonite clay works a lot like the clay in the swelling soil, but when contained between permeable and non-permeable fabric layers, water-soaked particles form a solid wall or mat. Once solidified, the mat prevents further water migration into the untreated soil.

By mixing portland cement, fly ash, or lime into the expanding soil, you can stabilize it to prevent heaving. You’re basically cementing the water-absorbing clay particles into place so they can’t grow in volume and cause damage. While this may work for your project, the effort of mixing may become cost-prohibitive the deeper the expanding soil levels.

Using degradable concrete void forms with any of the above approaches can create the best of all possible solutions. With void forms, you construct your foundation piers, grade beams and slab on grade with enough space around them to allow for soil expansion without impingement on the structure.

Formed from stiff cardboard with an exterior wax coating, VoidForm products are strong. The wax coating resists the moisture from the concrete during the pour. They will support a grade beam and slab on grade long enough for it to set and hold its own weight. Like any paper product exposed to water, the cardboard will deteriorate when wet. Once the cardboard starts wicking moisture from the underlying ground, it loses its strength and integrity, leaving a space devoid of both earth and void form. Because the forms are chosen in a size to keep enough distance between the slab and supporting soil, once the soil becomes saturated, it can heave to its maximum capacity without coming into contact with the concrete.

Degradable void forms are a great solution for concrete construction when removing the forms would be impossible. Reusable or leave-in-place void forms can create other desired concrete voids, such as conduits for utilities and plumbing pipes. But such forms would not help with expanding soils. Even soft forms, such as those composed of foam, will only collapse to about 25 percent of their original volume, taking up too much space in the void. Swelling soil can then push against the form which puts the same pressure on the concrete element.

Like every part of concrete construction, designing voids is an art. Using guesswork and crossed fingers to properly place void forms can easily result in an expensive do-over — or worse. Be sure to bring your construction plans and soil reports in to Barton Supply before ordering materials. Our experts have combined decades of experience with expansive soil remediation in Colorado. We can work with you to design the correct layout of void forms and indicate the form pieces and quantities you will need.

As a full-service concrete construction supplier, we have a dedicated team ready to support your project from dream stage to completion of the structural bones. Give us a call today to speak to our knowledgeable staff.