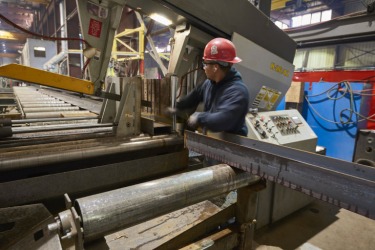 When designing with structural steel, does it have to be all straight runs, angles and joints? Fortunately, the answer is no. One of the many virtues of structural steel includes its ductility — the ability to undergo tension and compression while still remaining as strong as ever. Therefore, nothing prevents a steel beam from being bent into curves.

Many structural steel applications might call for custom bending of milled beams. A cambered steel beam can offer greater resistance to heavy vertical loads; curves and sweeps can introduce eye-pleasing, decorative elements to an architectural design.

What’s the difference between cambers, curves and sweeps?

Cambering a steel beam means bending it on its vertical axis. Imagine a ten-inch length of pasta in the shape of an I-beam, cooked and lying on the counter. If you set it on the narrow edges of its flanges with the web parallel to the countertop, then push a section with a finger or two, you’ve introduced a camber. A rise appears in an otherwise straight stretch of the “beam” on its vertical axis.

At first glance, the difference between a camber and a curve can seem pretty subtle. They both involve curvature, but a camber curve usually involves less than the whole beam. With the ends of the beam left straight — or taking a different radius — the curve presents a parabolic arch rather than representing a segment of a circle.

Cambering steel beams allows for heavy loads above as their arched form resists sagging under the weight.

Using our pasta analogy, if you push it with a disc shape —such as your pot lid — until it completely conforms to it, you’ve created a uniform section of a circle, not a parabolic arch. The pasta could rest on its flange edges or faces. Either way, you’ve got a curve.

You often see camber curves in bridge supports and barrel roofs. The uniform arc from end to end of the beams offers tremendous reinforcement to the structure in an elegant operation of physics.

If you pushed your pasta while it rested on the broad side of a flange, whether with a finger or a disc, you create a sweep. A sweep means a bend in the steel beam along the horizontal axis. It can form an arc, circle or take on a serpentine profile.

Sweep curves offer an easy way to change the direction of a bridge, if needed, or create unusual architectural features in a building, among other applications.

THE MECHANICS OF CREATING CURVES IN STRUCTURAL STEEL BEAMS

Steel fabricators can bend beams using a number of techniques. The most common include:

Applying heat to the section to be bent, while applying pressure, requires some serious skill and may not produce uniform results unless accomplished in a specialty machine.

A cambering machine uses hydraulic rams, much like a press brake. They push on the section to be curved while the ends of the beam are held in place. This method can offer more accurate results than heating.

A beam bender runs the beam through a series of rollers and creates very accurate curves and tighter radii. These angle rollers offer a great deal of versatility when it comes to cambers and sweeps.

WHY USE A FABRICATOR?

However, when you source your curved beams from your local fabricator, proximity to your job site works in your favor to significantly lower costs.

When your Colorado Front Range structural steel design calls for curved beams, you want a steel fabricator with plenty of beam bending experience. At Barton Supply, we not only have the machines to bend structural steel, our staff understands the special conditions involved. We can estimate, detail, bend and deliver to your job site according to your requirements. To learn more, give us a call today.