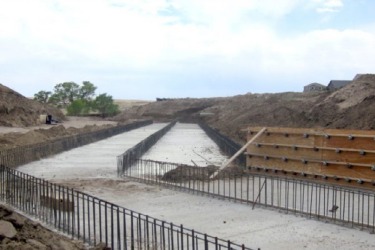 When thinking of the system that supports houses or commercial buildings, most people think it begins with the foundation. But even a foundation system needs a foundation, so the very first element when preparing the vertical support scheme is the foundation footer. While not all footings require reinforced concrete, we’ll concentrate on two types that do: grade beam and spread footings.

When the building goal includes fortitude and longevity, then you can’t forgo the expense of a foundation, especially in areas frequently attacked by high winds, earthquakes or flooding. Together with the footings, foundations also fight differential settlement, where the the building settles at different rates and not all vertically. In addition to avoiding the cracks and structural damage that occur from extreme differential settlement, foundations also:

Depending on a variety of environmental conditions at the building site, reinforced concrete footings can support the foundation with the maximum amount of strength.

In summary, footings help prevent foundations from sinking or buckling. They also help the foundation remain perpendicular to the ground, and keep tall buildings upright. Of the many possibilities for footings, reinforced concrete can underpin the foundation in two styles. Each works best for certain environmental conditions.

Where a foundation should extend deep into the earth, a grade beam footing may be the right choice. On steep slopes, in expanding soils and where the design calls for a pier or post foundation, grade beams span the distance between the load-bearing concrete piers or wooden posts. The grade beam either rests directly on the soil or has its own pilings for support. By digging a trench and pouring the grade beam no less than eight inches wide and to the depth equal to the span between the supports, a continuous grade beam footing will distribute the building load to the ground or to its bearing points where their bases distribute the load to the soil.

Spread footings work best for shallow foundations where the soil is well-compacted and stable. Also known as “T” footings (if the T is upside down), spread footings rest directly on the soil and are wider than the foundation wall by several inches. You determine the width and thickness according to the load it will bear above and the type of soil below.

Most commonly used in residential applications, often, spread footings need not be reinforced to meet code, although you should use nominal reinforcement for flexure anyway. The lower the load-bearing capacity of the soil, the wider the spread footing needs to be to avoid dramatic settlement. Spread footings are also poured below the frost line. The footers make for a level and smooth line upon which the concrete foundations are then poured to form a continuous wall supporting the perimeter of the home.

The expert concrete team at Barton Supply can help you determine the best concrete footing for your project and supply you with all materials you need to bring your plan to life. Whether you are building a custom home, a whole development or a commercial structure, we have everything you need to build the perfect footing and foundation system.