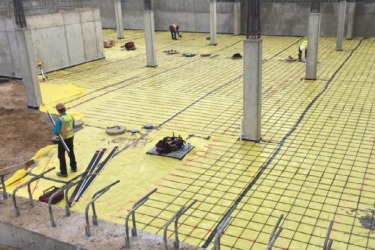 While more simple buildings, such as hangars and barns, can be prefabricated and assembled on-site as kits, more complex structures require custom steel created to specifications. These parts come from your steel fabricator who acquires the milled metal then customizes the steel framing building components exactly as you require them, piece by piece.

With any steel structure, you have primary framing and secondary framing. What are the common members of each, and what do they do?

The primary framing consists of all the elements that, combined, will carry the gravity — or vertical — loads of the building to the foundation. Without the complete primary frame, the building would not stand up to vertical or lateral loads over time. It provides the bones upon which the rest of the framing attaches. Because the main frame bears the dead weight of the building — and the live loads when it’s in use — almost all its members will be hot-rolled structural steel. The following items, bolted or welded together, form the superstructure:

Because the secondary schema need not hold the gravity loads, its members take shape from cold-rolled sheet steel. The metal passes through rollers to configure cross-sectional shapes such as C, Z, U, L or V. Special curling inward of the edges can create a stronger length of metal. Also, the 12 to 16-gauge sheets of steel can be fabricated to conform to custom requirements more complicated than the basic letter shapes. The common secondary framing parts include:

Along with the foregoing elements of steel framing, a project will require a multitude of fasteners, some common, others custom.

Barton Supply stands ready to provide all of your steel framing components, whether primary or secondary. Our experienced team can help you coordinate your project from the ground up. With estimators, coordinators, project managers and fabricators working diligently for you, all your Front Range steel framing building components exist right here at your fingertips.